In this nonfiction memoir, Derek, a genderqueer sissy male, decides that a women's studies class in college would be a good place to engage people in discussions about gender. Derek has reason to worry that he's invading women's space by attending women's studies classes. At the same time, he's a minority within that space, and, as a gender-nonconforming sissy in the 1980s, a person with a gender identity that wasn't acknowledged and recognized yet, he's been somewhat marginalized by gender himself. This narrative tale illustrates the complexities of intersectionality, the interconnected nature of social categorizations such as race, class, and gender and so forth. The main character is male, the privileged sex in the patriarchal context. The story follows Derek down Oklahoma highways and into heroin dens in Harlem and then into the homeless shelters of 1980s New York City, as the determined but not always practical Derek pursues his dream. Along the way, the story delves into the complexities of privilege and social identity in ways that challenge assumptions about power and marginalization--not in primary-color simplicity but by exploring privilege and deprivation along a number of different dimensions and showing it in all of its native complexity, all while still respecting a concern for empowering the voice of those left out. 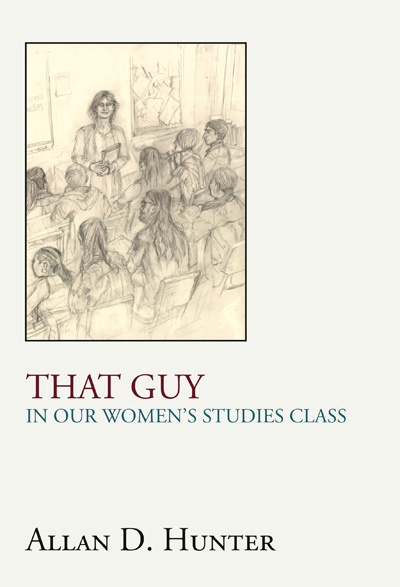 Allan Hunter's book, That Guy in Our Women's Studies Class, lives at the intersection of multiple generations. In the 80s and 90s, Hunter could carefully describe his gender and sexual identities, but was searching for a place to connect with others who could relate to who he was. Today young adults confidently and proudly identify and communicate their sexual and gender identities along a spectrum of options available to them.  In retrospect, Allan Hunter was ahead of his time. His search, and articulation of it, helped define the spaces currently available for individuals who don't fit traditional patterns of gender and sexuality.

— Raymond C. Maietta, Ph.D. President, ResearchTalk Inc.
I found the premise of this book fascinating: a guy who deeply identifies with women, has a passion for feminist literature, yet is resolutely cisgender and has come out as a "heterosexual sissy." A perpetual outsider, Derek imagines he'll find a home for himself in women's studies; he ends up sparring with his professors because they don't want to touch radical feminist theory. You can't help feeling for and admiring this guy whose single-minded ambition seems to be to find a place where his ideas and passions will be met with if not enthusiasm then at least respect. Alas, inquiring minds like his are mostly not appreciated in the settings where he lands.

The book as a whole could have used a good editor but it moves along at a very quick pace and I found it hard to put down. The university scenes especially are nicely fleshed out and compulsively readable. — Lise Weil, Author, In Search of Pure Lust(goodreads review)
How do men navigate the world of gender identity in a society that forcefully upholds gender norms? And how are men able to explore their privileged role in society while trying to engage in women’s studies and feminist theory?

These questions are explored in Allan D. Hunter’s latest nonfiction memoir, “That Guy in Our Women’s Studies Class” (2022)...

“That Guy in Our Women’s Studies Class” is dense, and it is not for the casual reader. The memoir is chock-full of advanced literature references, extensive thinking and debates on feminist theory, and thought-provoking theory about society and the way the world is structured. For readers not interested in women’s studies, feminist theory, sociology or psychology, this book may not be the best choice. But for a reader who is ready to question privilege and social identity, this book is the way to go...

Everyone who wants to walk in the shoes of this courageous, intelligent sissy activist will enjoy his two-part autobiography, "GenderQueer: A Story from a Different Closet" and "That Guy in our Women’s Studies Class." The first describes growing up in Los Alamos, New Mexico, where he struggled with being different and identifying what that meant, with no role models like himself, nor people to discuss his struggle with. The second describes his ongoing intellectual, social and academic search during college, where he enters a Women’s Studies program and struggles to be accepted in as a heterosexual male who has found that the people with whom he identifies most strongly are “radical feminists."

In addition to the joy of following the personal history and growth of this brave author, those interested in feminist history and woman’s studies will find this book enlightening, as it includes a wealth of material for future reading...

We look forward to Hunter continuing to help us understand the unique beauty, skills and challenges faced by the many sissy males in our society! — Mim Chapman Author, Sex-educator and Relationship Coach Santa Fe, NM
"Hi, I’m Derek Turner, I am interested in feminism and I want to take this course."

So proceeds with great determination this young "sissy femme" who is male and heterosexual, yet with a feminine nature, as he describes himself in this "nonfiction memoir" which reads more like a novel...

Derek’s determination to succeed and be heard is marvelous: he helps bring political awareness to the staff and residents of the Creedmoor Psychiatric Hospital, where he has managed, creatively, to find a place to live while attending school; inserts a fresh voice in classroom discussions about the abuses of patriarchy; and even shakes up the school’s Catalyst newspaper.
This era marked the blossoming of feminist theory, and readers will relish the roiling discussions about pornography, rape, power differentials, racism, sexual liberation versus feminism around works by writers then very much in vogue like Marilyn French, Vivian Gornick and Andrea Dworkin...

A Reader’s Guide at the back offers provocative questions about themes that Derek is pursuing, how he adjusts his understanding over time and what a change agent is...this work will spur readers to go back and check out some of the inspired texts.